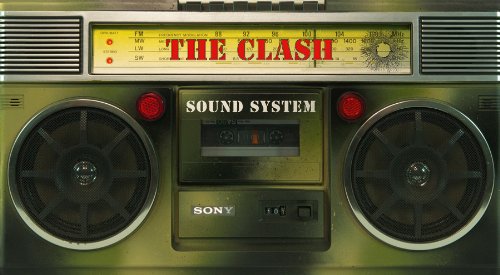 Designed and compiled by The Clash, the new deluxe 12-disc Sound System collects for the first time all of the band’s seminal studio albums remastered, plus three CDs of demos, non-album singles, B-sides and rarities; Also includes a DVD which couples all of the band’s videos with unseen footage from the archives of Julien Temple and Don Letts

Released separately on the same date are a new compilation The Clash – Hits Back (available on 2-CD/3-LP/digital), as well as The Clash 5 Studio-Album Set, separate box sets which collect the band’s original five studio albums (The Clash, Give ‘Em Enough Rope, London Calling, Sandinista! and Combat Rock) on CD and vinyl LP

In this clip, newly created by the band, watch The Clash announce the release of Sound System in “The Cut Out Show”:  http://smarturl.it/CutOutShow.  See the trailer for Sound System here: http://youtu.be/bgL_CBC83qk .

Conceived and compiled by The Clash, Sound System is a significant and unique collection of the complete recorded works by the 20th century’s most influential British band. Greatly enhanced by the careful remastering which renders the original recordings more vital and crisp, all contained in Paul Simonon’s iconic design, with a selection of bonus material, Sound System is the most important and unique box set to ever be released by the band.

Prompted by demand for a complete collection, Sound System is a powerful reminder of The Clash’s enduring legacy.  It’s hard to think of a band before or since that have exerted such universal influence. The 1970s punk movement gave birth to some important bands, but none were more important than The Clash. Here were a band who pushed and broke musical boundaries, while fusing musical experimentation with a socio-political conscience. From their eponymously-titled debut album in 1977, the band incorporated elements of reggae, rap, jazz, dance, rockabilly and ska in their music. Their passionate, political agenda continues to inspire new fans and musicians alike. Indeed, the issues The Clash tackled are as relevant today as they were in the late ’70s/early ’80s. Dubbed “the only band that matters” in their heyday, the same could be said almost 40 years later.

8. First Night Back In London (B-side Know Your Rights)

11. The Beautiful People Are Ugly Too (Outtake) – PREVIOUSLY UNRELEASED

Extracts from The Clash’s first ever recording session at Beaconsfield Film School 1976. Recorded by Julien Temple

Promo and interviews with Tony Parsons

I’m So Bored With The USA 2:14  – PREVIOUSLY UNRELEASED

This Is Radio Clash

Released simultaneously, The Clash – Hits Back features 33 of the band’s iconic tracks across a 2-CD set or a 3-LP vinyl set. The tracklist is sequenced from the band’s legendary Brixton Fairdeal show in 1982.

The Clash – Hits Back contains the best studio recordings of the full set, plus 8 additional iconic tracks.  It comes with the original setlist, handwritten by Joe Strummer which he usually taped to the back of his Telecaster before each gig.

“Every show was different. Joe would spend a lot of time composing the running order, considering dynamics, emotional impact and the key the songs were in. This record is based on Joe’s setlist from The Casbah Club UK Tour, Brixton Fairdeal, 10th  July 1982”. Mick, Paul & Topper.

6. The Guns of Brixton

15. This Is The Radio Clash

The Clash – The Clash 5 Studio-Album Set