Includes landmark songs “Why We Sing” with the Family, “Looking For You,” “Stomp (Remix)” with God’s Property, “Now Behold The Lamb (live)” Christmas song, Grammy®-winners “Imagine Me” and “Help Me Believe” – and more!

Sanctified music in America has no greater voice over the past two decades thanKirk Franklin, the native Texan who revolutionized the gospel choir, and single-handedly brought Contemporary Gospel music to forward-thinking R&B radio programmers. In the process, this visionary singer, musician, songwriter, arranger, producer – and of course, choir director – has amassed 18 RIAA gold and platinum records, 10 of which went to #1 on the Billboard Gospel Charts. For his work, he has earned seven Grammy Awards® (five of which were for Best Album in all three major Gospel categories), 12 Gospel Music Association (GMA) Dove Awards, and 35 Stellar Awards, the most won by any artist.

In celebration of the 20th anniversary in 2012 of Franklin’s founding of his first major choir recording group (The Family) in 1992, and the extraordinary path that his life’s work has taken him with his choirs and as a solo artist, THE ESSENTIAL KIRK FRANKLIN presents the first full-length, 28-song, double CD overview of his entire career. In observance of Black History Month in February, THE ESSENTIAL KIRK FRANKLIN will be available at all physical and digital retail outlets starting January 24, 2012, through Fo Yo Soul/Verity/Legacy, a division of SONY MUSIC ENTERTAINMENT.

THE ESSENTIAL KIRK FRANKLIN marks the first multiple-CD collection to range from tracks with the Family on Franklin’s debut album (Kirk Franklin And The Family, recorded in 1992) all the way through his most current studio album of 2011 (Hello Fear). In 1992, a demo tape of the Family made its way to GospoCentric Records outside Los Angeles, which has been Franklin’s record label ever since. (The label was later bought by Zomba Music Group, which brought it to Sony Music.) The 1,200-word liner notes essay for the new collection is written by Bil Carpenter, author of Uncloudy Days: The Gospel Music Encyclopedia.

Because of his magnetic personality and immense talent, Kirk Franklin has been a collaborator with the greatest artists in the pop, R&B and gospel fields. On 1997’s #1 Gospel/ #1 R&B album God’s Property, he was joined by Cheryl ‘Salt’ James (of the rap group Salt-N-Pepa) on the opening “Stomp (Remix),” which sampled P.Funk’s “One Nation Under a Groove.”

On Franklin’s memorable album Hero of 2005, Stevie Wonder joined him on “Why” and Marvin L. Winans on a live version of “Brokenhearted.” The album, which won the Grammy Award® for Best Contemporary R&B Gospel Album, also included “Imagine Me” by Franklin, the Grammy® winner that year for Best Gospel Song.Hero was also named CD Of the Year at the Stellar Awards, and Urban Gospel Album of the Year for 2006 at the Dove Awards, which also proclaimed “Looking For You” Urban Song Of the Year, while “Imagine Me” was named Urban Song Of the Year in 2007.

“With his Hip Hop threads and a low fade hair cut in an age of Jheri curls,” Carpenter writes in his liner notes, “[Franklin] has stood apart from any successful gospel artist at the time and epitomized the urban urchin fighting to overcome his circum­stances. His tunes have helped millions make the uneasy transition from puberty to adulthood while being in the world but not of it, as The Bible commands. His songs revolve around everyday issues that speak to the faithful in a frank manner they know first hand.”

Kirk Franklin’s humble beginnings are well known to his fans and followers, who can tell you how he was abandoned by his birth mother and raised up in the church in Ft.Worth by his great aunt Gertrude, who financed her nephew’s piano lessons at age four by collecting tin candeposits. At age 11, he famously became music director of the Mt.RoseBaptistChurch. His teen years were wild, but he eventually returned to the church and an early association with the Dallas-Ft. Worth Mass Choir at age 20.

Two years later, he founded the Family, whose debut album was recorded as a demo in 1992, and released on GospoCentric via Sparrow (with just minimal production polish) in 1993. Kirk Franklin And The Family was a phenom that set the gospel world on its ear. Recorded live in Ft.Worth, every track was written and arranged by Franklin, who featured nearly all the 17 members of the choir on various tracks. “Silver And Gold,” “Why We Sing,” “He’s Able,” “Speak To Me,” and the climactic 8-minute “Family Worship Medley” bear witness to the album’s power.

Kirk Franklin And The Family spent nearly two years on the Billboard Gospel chart, including 42 weeks at #1, crossed over to the R&B chart (where it rose to #6), even made a respectably unheard-of crossover to #58 on the pop side. It became the first contemporary gospel album to be certified RIAA platinum. At the 24 th annual Dove Awards of 1993, it was voted Traditional Gospel Album Of the Year. “Why We Sing” was voted Traditional Gospel Song Of the Year and started to pick up R&B radio airplay which (nearly two years after the album release) resulted in the song breaking through on the R&B chart.

It was the start of a dynasty that sent every subsequent Kirk Franklin album to #1 on the Gospel chart, #1 (or Top 10) on the R&B chart, while crossing over to the pop side as well. THE ESSENTIAL KIRK FRANKLIN draws tracks from each of the following #1 Gospel albums:

Carpenter sums up by quoting from Franklin’s best-selling autobiography, Church Boy: My Music & My Life (Word, 1998): “We weren’t trying to imitate anybody’s style or to make some kind of statement…We just let the music take us wherever the Spirit led us and wherever the music wanted to go.” 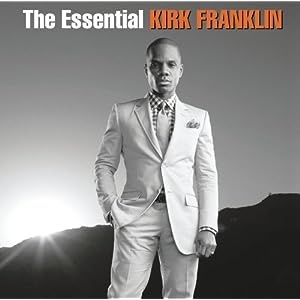 1. He Reigns/Awesome God (The Medley) (live) – by Kirk Franklin with Papa San (F)

7. Why – by Kirk Franklin with Stevie Wonder (G)

3. Blessing In The Storm – by Kirk Franklin And The Family (H)

B ) Kirk Franklin And The Family Christmas (GospoCentric, released 11/7/95)