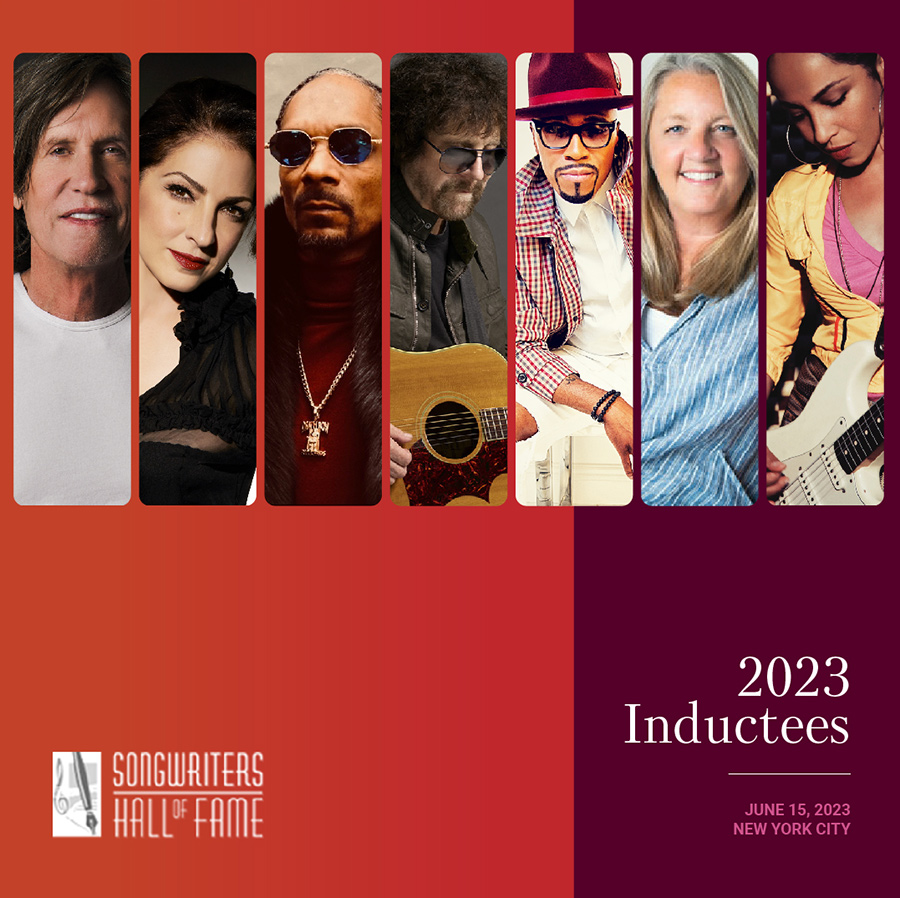 Musical icons Sade Adu p/k/a Sade, Glen Ballard, Calvin Broadus Jr. p/k/a Snoop Dogg, Gloria Estefan, Jeff Lynne, Teddy Riley, and Liz Rose will become the latest inductees of the Songwriters Hall of Fame at the organization’s 52nd Annual Induction and Awards Gala. These legendary songwriters are credited with mega-hits such as “Smooth Operator,” “Man In the Mirror,” “Drop It Like It’s Hot,” “Rhythm Is Gonna Get You,” “Mr. Blue Sky,” “My Prerogative,” and “You Belong With Me.” The star-studded event is slated for Thursday, June 15th at the Marriott Marquis Hotel in New York City. Additional special award honorees will be announced soon.

SHOF Chairman Nile Rodgers said, “The music industry does not exist without songwriters delivering great songs first. Without them there is no recorded music, no concert business, no merch . . . nothing, it all starts with the song and the songwriter. We are therefore very proud that we are continually recognizing some of the culturally most important songwriters of all time and that the 2023 slate represents not just iconic songs but also diversity and unity across genres, ethnicity and gender, songwriters who have enriched our lives and, in their time, literally transformed music and the lives of billions of listeners all over the world.”

Sade Adu p/k/a Sade:
Over an exceptional songwriting career spanning more than three decades, Sade Adu’s six albums have produced singles such as Your Love Is King, Smooth Operator, and By Your Side’ Sade has gone on to achieve Number 1 albums across the world, collecting several Grammys, MTV Video Music Awards, and a BRIT Award along the way.

Her most recent studio album, Soldier Of Love, charted at number one in 15 countries, including the US, upon release in 2010. Hip-hop luminaries have sampled from Sade’s work creating new club classics, and her timeless tracks have been covered by Deftones, Donna Summer, Frank Ocean, Herbie Hancock, Jason Mraz, Lauryn Hill, LeAnn Rimes, Marsha Ambrosius featuring Dr. Dre, Prince, The 1975, Tori Amos, and You + Me, amongst others.

Glen Ballard is a six-time GRAMMY award-winning songwriter and producer, an Olivier Award winner, and an Academy Award nominee.

He co-wrote the song score and was an executive producer for Netflix’s series The Eddy. In addition, he co-wrote the original songs for Back to the Future the Musical, the 2022 Olivier Award winner for Best New Musical, which will be coming to Broadway in the Summer of 2023.

Key songs in the Ballard catalog include: *  Man In The Mirror  *  You Oughta Know  *  Hold On  *  The Voice Within  *  The Space Between

An Entertainment Industry Mogul and Entrepreneur, Snoop Dogg has reigned for nearly three decades as an unparalleled force who has raised the bar as a globally recognized innovator.  Snoop Dogg is an American rapper, singer, songwriter, actor, record producer, DJ, media personality, businessman and icon.

In addition to his extensive work in music, Snoop Dogg is a serial entrepreneur with endeavors in Web 3.0, tech, entertainment, lifestyle, global consumer brands and food/beverage industries.

International Superstar, Gloria Estefan, is a Grammy award-winning singer, actress, songwriter, author of two New York Times best-selling children’s books, philanthropist, and humanitarian. She is considered one of the world’s most recognizable and beloved performers and the most successful Latin crossover artist in music history, per Billboard Magazine.

Having sold over 100 million records worldwide, Estefan has garnered eight Grammy Awards and an Oscar-nominated performance for the song Music Of My Heart. She also received an American Music Award for “Lifetime Achievement” and was inducted into the Latin Songwriters Hall of Fame, she received the Gershwin Prize for Popular Song, in 2015, President Obama honored Emilio and Gloria Estefan with the Presidential Medal of Freedom, the nation’s highest civilian honor, presented to individuals who have made meritorious contributions to the United States, to world peace, and cultural endeavors. In 2017, Gloria was the first Cuban-American singer-songwriter to receive The Kennedy Center Honors.

ON YOUR FEET! the TONY Award-nominated Broadway musical based on the lives and music of Emilio & Gloria Estefan. As Executive Producers, it is the story of two people who—through an unwavering dedication to one another and their pursuit of the American dream— showcased their talent, music, and heritage to the world in a remarkable rise to global superstardom. On Your Feet!! has received rave reviews and nominations for TONY Awards, Outer Critics Circle Awards, Drama League Awards and is now on tour worldwide.

She is the founder of the Gloria Estefan Foundation whose mission is to support charitable programs for disadvantaged children and empower young people through education and opportunity. The Foundation also supports spinal cord research through the Miami Project to Cure Paralysis.

In 2020 her GRAMMY-winning album, Brazil305, topped the charts worldwide while she served as one of three hosts for her four-time EMMY- nominated, EMMY-winning, and GLAAD Award nominated Facebook Watch series, Red Table Talk: The Estefans. Its 20 episodes are streaming now. In 2021 she voiced the character Marta in the critically acclaimed animated film Vivo, with music written by Lin-Manuel Miranda and released on Netflix.

Last summer, Estefan starred in Father of the Bride opposite Andy García airing on HBOMAX. The movie became HBOMAX’s biggest audience for streaming-only film and soared to the No. 1 title spot across HBO Max worldwide.

Released in 2022, the Estefan Family Christmas album featuring Gloria alongside her daughter, Emily (27) and grandson, Sasha (10). This album is one of the first of its kind to combine three generations. It includes 12 Christmas classics and two original songs, one of which was written by Gloria, Emily, and Sasha. The Estefan’s performed their single Thankful at the Macy’s Thanksgiving Day Parade, CBS special A Home For The Holidays and the White House Tree Lighting.

Best known as a founder and leader of Electric Light Orchestra, pop-rock luminary Jeff Lynne was a writer of such hits as Can’t Get It Out of My Head, Livin’ Thing, Mr. Blue Sky, and Don’t Bring Me Down. He wrote, arranged and produced virtually all of ELO’s string of 15 hit singles that rose to the Top 10 record charts in the UK 10 LPs during the 1970’s and 1980’s, including its most successful album, Out Of the Blue, a double LP.

He later co-founded the Traveling Wilburys with George Harrison, Bob Dylan, Roy Orbison and Tom Petty, and had a writing hand in their hits Handle with Care, and End of the Line.

Lynne, who was appointed as an Officer of the British Empire, is a 2017 Rock & Roll Hall of Fame inductee and has received a number of prestigious awards, most notably three Ivor Novello Awards with one being for Outstanding Service to British Music and has written or co-written songs for the likes of Orbison (You Got It) and Petty (I Won’t Back Down and Free Fallin‘).

Credited with the creation of the New Jack Swing genre where he fused hip-hop and R&B in his productions, Teddy Riley not only has had seminal influence on modern-day R & B but on gospel music as well, both of which became more open to using rap and sound effects. Riley was also known for his consistency and drum ideas in his recordings.

Since his career began in 1984, Riley has directed his own bands–namely Wreckx-N-Effect, Guy, and Blackstreet–and produced and written hit songs for a host of stars, including Michael Jackson, Bobby Brown, Stevie Wonder, Kool Moe Dee, and Jane Child.

With numerous Number One hits and platinum albums, Over his career, he has written or produced such songs as Michael Jackson’s Remember the Time, Keith Sweat’s Why Me Baby, Wreckx-N-Effect’s Rump Shaker, Bobby Brown’s My Prerogative, and Kool Moe Dee’s How Ya’ Like Me Now?

On film soundtracks, his work can be heard on the Number One rhythm and blues single My Fantasy for the Spike Lee film, Do the Right Thing, and in the title track of the film New Jack City.

Rose was born and raised in the Dallas, Texas area. In the mid-1990s she moved to Nashville and began writing songs at the age of 37. One of her first cuts was Elisabeth, recorded by Billy Gilman in 2001. In 2003, Gary Allan took Rose’s Songs About Rain into the country Top 20.

Liz was a frequent collaborator of Taylor Swift’s, co-writing 16 songs together, including the No. 1 crossover hits Teardrops on My Guitar, You Belong With Me (which won the 2010 BMI Award for Song of the Year), Tim McGraw, White Horse (which won the 2010 Grammy Award for Best Country Song) and All Too Well to name a few. Most recently, Liz has been nominated for the 2023 GRAMMY Award for Song of the Year with All Too Well (10 Minute Version) (Taylor’s Version).

Liz was the recipient of the 2012 ACM Award for “Song of the Year” in honor of Eli Young Band’s Crazy Girl. She has also penned songs for many other artists including Tim McGraw, Dan + Shay, Allison Krauss, Blake Shelton, LeeAnn Womack, Chris Young, Bonnie Raitt and more. In 2015, she won “Song Of The Year” at the Country Music Association awards and won the GRAMMY Award for “Best Country Song” for writing Girl Crush by Little Big Town. Girl Crush was written with Hillary Lindsey and Lori McKenna, and collectively they call themselves The Love Junkies. Together, they have cuts with Tim And Faith, Little Big Town, Maren Morris, Miranda Lambert, Cam, and Carrie Underwood.

In the midst of a career of telling other people’s stories, Liz debuted an album of her life story, called Swimming Alone in 2016.  “I started looking back and found some things in my past that really stuck out.  I thought it was time to write my own record.” Rose adds, “Then I had some great friends, loved ones and mentors encourage me to record them and sing them. I’m not a great singer, but I love to sing and it’s my story, so…” Swimming Alone invites the listener on a journey into Rose’s past, detailing memories from her parents’ family-run dime store with Five & Dime, to falling in and out of love in Ex-Husbands.

Liz recently collaborated with Miranda Lambert on her last album Wildcard landing her five cuts including, It All Comes Out In The Wash which was nominated for the GRAMMY Award for “Best Country Song” in 2020. Rose also has recent releases with many of country music’s top artists including, Maren Morris, Gabby Barrett, Lauren Alaina, Ingrid Andress, Kenny Chesney, and more!

Liz Rose is not only a songwriter, but a successful publisher. Rose began as a publisher before signing her first songwriting deal with Jody Williams Music. In 2010, Rose launched Liz Rose Music with her son Scott Ponce as a home for burgeoning songwriters. The company continues to grow and sign new talent. The company operates on the simple principle, “Great Songs, Great People.” Since its inception, Liz Rose Music has built a diverse, distinguished, and talented roster of songwriters and has acquired Number 1 hits.