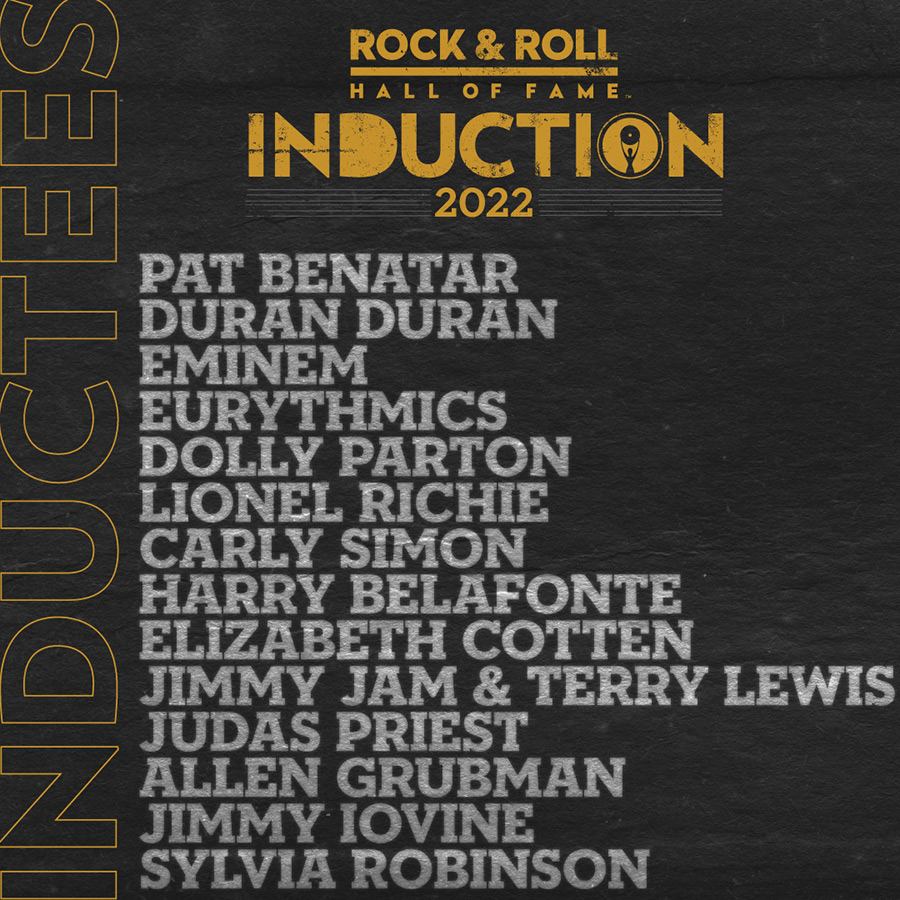 The Rock & Roll Hall of Fame Foundation announced today its 2022 Inductees in the following categories:

To be eligible, artists are required to have released their first record 25 years prior to Induction. Eminem, Duran Duran, Dolly Parton, Lionel Richie, and Carly Simon were on the ballot for the first time. This is Eminem’s first year of eligibility. This is the first year in the Hall’s 37-year history that six female acts will be inducted in one class.

The 37th Annual Rock & Roll Hall of Fame Induction Ceremony will take place on Saturday, November 5, 2022 at Microsoft Theater in Los Angeles, California. The Induction Ceremony will air at a later date on HBO and stream on HBO Max, along with a radio simulcast on SiriusXM’s Rock & Roll Hall of Fame Radio channel 310 and SiriusXM’s Volume channel 106.

Ticket on sale information will be announced later. Select Rock Hall donors and members get exclusive Induction ticket opportunities. Donate or join by June 30, 2022 to be eligible. Visit rockhall.com/join to learn more.

Drawing from several musical traditions, Harry Belafonte’s lyrical baritone and emotive singing connected Americans to Black world culture. Singer, actor, producer, activist, and ally, Belafonte used the arts as a mechanism to effect social change on a global scale. Belafonte was born in Harlem in 1927 to multiethnic parents from the Caribbean. As a child, he moved to his mother’s native Kingston, Jamaica – “an environment that sang” – where he was exposed to the captivating music of calypso as well as prejudice based on his skin tone. Back in New York, Belafonte began acting classes at the New School’s Dramatic Workshop in 1945, where he befriended actor-singer-activist Paul Robeson, the inspiration for Belafonte’s social activism. Swept up in the New York folk scene in 1950, Belafonte created a new repertoire of folk songs, work songs, and calypsos, providing an authentic and dignified look at Black life and earning him a contract with RCA Victor in 1953. In 1955, Belafonte met Irving Burgie (aka Lord Burgess), whose songwriting on Belafonte’s debut album would forever change Belafonte’s career. The first album to sell over a million copies in a year, Calypso (1956) introduced Caribbean folk music to American audiences, who dubbed Belafonte the King of Calypso. This early sound made a lasting impact on American music – Gotye, Lil’ Wayne, and Jason Derulo have all sampled “Day-O (The Banana Boat Song)” in recent years, while “Jump in the Line (Shake, Senora)” was featured in the 1988 film Beetlejuice and its 2019 Broadway musical production. In the 1960s, Belafonte returned to his musical roots in American folk, jazz, and standards, while also emerging as a strong voice for the civil rights movement. Belafonte was a close confidante, friend, and supporter of Martin Luther King, Jr. He helped organize “We Are the World” and has been a UNICEF Goodwill Ambassador since 1987. He was a Grand Marshal for the 2013 New York City Pride Parade and advised on the 2017 Women’s March on Washington. At the age of 95, Belafonte has epitomized the life of a world citizen, living by a single truth: “Get them to sing your song, and they will want to know who you are, and if they’ve made that first step, we can find a solution to hate.”

Much like the moment in The Wizard of Oz when the film turns from black-and-white to Technicolor, the opening strains of Eurythmics’ “Sweet Dreams (Are Made of This)” irrevocably changed perceptions of 1980s pop-rock. Employing the mechanistic funk of Krautrock, the grit of gospel, and the strangeness of psychedelia, Eurythmics’ genre- and gender-fluid pop vision was both futuristic and beholden to past eras, while remaining eminently accessible. Eurythmics’ lyrics and imagery presaged the third wave of feminism and a more mainstream deconstruction of sexuality and gender, with their videos and live performances featuring androgynous frontwoman Annie Lennox, at once formidable and alluring. The stories the band told, through song and theatrics, spoke to what it meant to live and love in the late 20th century.

In 1983, the operatically powerful Lennox and experimental producer/multi-instrumentalist Dave Stewart mostly eschewed guitar riffs in favor of analog synthesizer lines, sequenced to produce bedrock bass lines of melodic depth, resulting in their cynical breakout hit “Sweet Dreams.” Follow-up album Touch included three major hit singles and is ranked among Rolling Stone’s 500 Greatest Albums of All Time. Strikingly, when Eurythmics expanded their sound to include big-band strings and horns, they found continued acclaim. Stewart turned up his rock guitar on “Would I Lie to You?” and added lush orchestral arrangements to “Here Comes the Rain Again,” but no song better illustrates the duo’s ability to effortlessly pivot between rock and R&B than the iconic feminist anthem “Sisters Are Doin’ It for Themselves,” which combined Lennox’s commanding vocal with Aretha Franklin and members of Tom Petty and the Heartbreakers.

In 1990, Eurythmics went on hiatus to pursue expansive and award-winning solo careers, reforming in 1999 for the politically charged album Peace. Their 2005 empowering single “I’ve Got a Life” hit Number One on Billboard’s dance chart. After four decades, Eurythmics’ longevity and influence continue through performances in support of their charitable works and political activism.

Judas Priest took the molten steel forged by Black Sabbath and Deep Purple and used it to become metal gods, creating the mold for the future of all heavy metal. If you’ve seen Judas Priest live, you know the powerful force of their dual guitar attack, driving riffs, soaring operatic vocals – the unapologetic sound of heavy metal played at its absolute best. The roots of the band go back as far as 1969, but it was when vocalist Rob Halford and second lead guitarist Glenn Tipton joined guitarist K. K. Downing and bassist Ian Hill in the 1970s that their unique sound began to take real shape. In 1980, they released the classic British Steel, the album that would propel the band beyond the world of metal and hard rock – starting a run of platinum selling albums – and onto mainstream radio with “Living After Midnight” and “Breaking the Law.”

Judas Priest are a band whose message of being yourself and loving the music you love – regardless of trends – resonates all over the world. Rob Halford is a pure singer with incredible range who is considered the best of the best by all fans of metal. His studded leather, biker- inspired visual look was adopted by many metal bands who followed. Openly and proudly gay, Halford has led an entire genre of bands and fans toward a more enlightened understanding and inclusiveness. Having gone through a number of lineup changes over the years, the band is still performing today with plans for a new album to follow 2018’s Firepower. The list of bands who have taken inspiration from Judas Priest is long and wide, including everyone from Metallica and Slipknot to Pearl Jam and Rage Against the Machine. After 50 years, Judas Priest are still at the top of their game with intense live performances and a firm commitment to a genre they helped define.

With her prodigious songwriting talent, vocal and instrumental prowess, charisma, and trademark style, Dolly Parton has achieved immense global success as a musician and blazed a trail for generations of artists to come. In a career spanning six decades, she has recorded more than 50 studio albums and, by her own estimation, written nearly 3,000 songs.

Parton’s life started in a one-room cabin in Tennessee – humble beginnings that would inspire songs like “Coat of Many Colors.” Music provided an escape and filled Parton’s cup of ambition. At age 11, she co-wrote and released her first single, “Puppy Love” (1959). After high school, Parton moved to Nashville, where her compositions were recorded by artists including Hank Williams Jr. and Kitty Wells. Showcasing her songwriting acumen and her airy, yet gritty voice, Parton’s 1967 debut album, Hello, I’m Dolly, was a hit, and as a regular on The Porter Wagoner Show, she won over the audience with her talent and charm. After a string of successful duets with Wagoner and solo Number One hits like the rollicking “Joshua” and the haunting “Jolene,” Parton parted ways with Wagoner to take control of her career. Their split inspired Parton’s chart-topping “I Will Always Love You”: In addition to Whitney Houston’s smash cover of that song, Parton’s “Jolene” has been recorded by such diverse artists as the White Stripes.

Parton’s unapologetic femininity belied her shrewd business acumen, an asset in the male- dominated music industry. Refusing to be underestimated, she set her sights on the pop charts, and the strategy paid off. Her pop hits include “Here You Come Again,” “9 to 5” – the title track for the film in which she co-starred – and her Number One duet with Kenny Rogers, “Islands in the Stream” (1983). Other collaborations include a series of recordings with Linda Ronstadt and Emmylou Harris, under the name Trio.

A living legend and a paragon of female empowerment, Parton is beloved not only for her prolific body of work, quintessential style, and philanthropic efforts, but for the humor, wit, and self-deprecating grace that shine through everything she does. Her crossover success broadened the audience for country music and expanded the horizons for countless artists who followed.

In the early 1970s, singer-songwriter Carly Simon emerged as a gifted storyteller and lyricist who broke established narratives, writing exquisite songs about modern women’s lives. Her confessional balladry, gorgeous melodies, and catchy choruses made her a captivating voice among a new generation of singer-songwriters.

Born into an affluent New York City family, Simon had met such icons as Albert Einstein and Eleanor Roosevelt by the time she attended college. Inspired by Odetta, she first began performing folk music with her sister, Lucy, as the Simon Sisters. Her unique viewpoint as a songwriter became evident in Simon’s 1971 self-titled solo debut. It yielded the Top Ten single “That’s the Way I’ve Always Heard It Should Be,” and she won the Best New Artist Grammy. Her sophomore album, Anticipation, garnered even more success and attention. With nuanced and sophisticated songcraft like “Anticipation,” Simon explored love, breakups, and family relationships; her alto vocals and crystal-clear enunciation gave her songs a buoyancy, even when their subject matter was heartbreak.

Her third album, the masterful No Secrets, included the Number One smash “You’re So Vain,” a pop juggernaut that connected with audiences worldwide and became her signature song. Following Simon’s 1972 marriage to James Taylor, the couple recorded the playful duet “Mockingbird,” a Number Five hit in 1974. Three years later, Simon sang “Nobody Does It Better” for the James Bond film The Spy Who Loved Me. As one of the franchise’s most enduring theme songs, it sparked the admiration of Radiohead, who later covered it in live performances. Simon’s “Let the River Run,” written for the film Working Girl, resulted in Simon becoming the first performer to win an Academy Award, a Golden Globe, and a Grammy for a song composed and performed entirely by a single artist.

Simon’s influence on fellow artists is incalculable – among them, Taylor Swift, who invited her onstage in 2013 to perform a duet of “You’re So Vain” and considers Simon one of her “absolute heroes.”