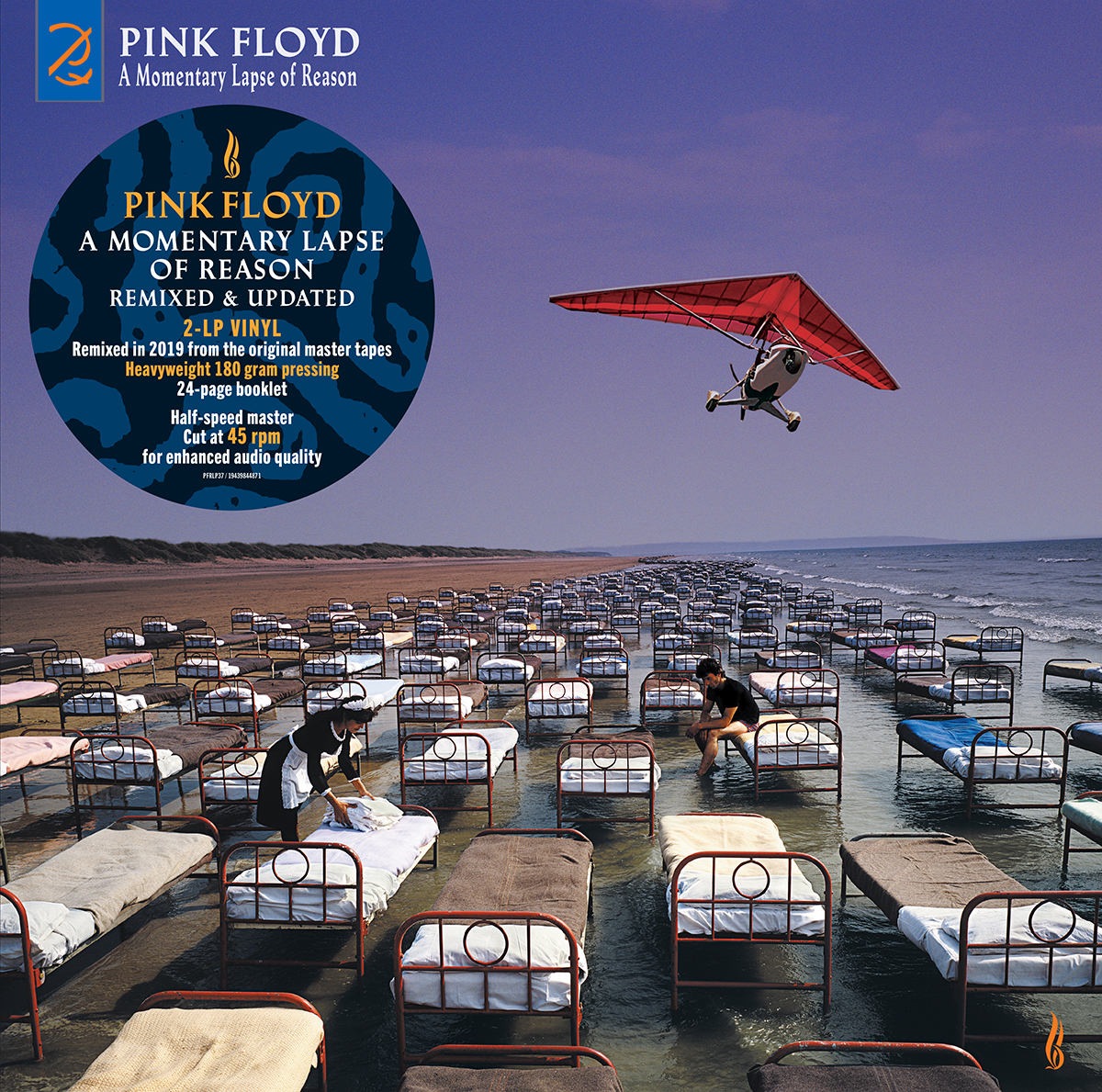 THE CLASSIC ALBUM, REMIXED AND UPDATED AND IN ASTOUNDING 360 REALITY AUDIO

FEATURING LEARNING TO FLY, SORROW AND ON THE TURNING AWAY

Remixed and updated from the original 1987 master tapes for ‘The Later Years’ by Andy Jackson with David Gilmour, assisted by Damon Iddins, the album will be available on Vinyl, CD, DVD, Blu-ray and digitally with Stereo and 5.1 mixes. In addition, for the first time, the album will be presented in 360 Reality Audio, a new immersive music experience that closely mimics the omni-directional soundscape of live musical performance for the listener using Sony’s object-based 360 Spatial Sound technologies. ‘A Momentary Lapse Of Reason’ will also be released in Dolby Audio and UHD in addition to 360 Reality Audio, all of which will continue with other Pink Floyd releases.

The release of ‘The Later Years’ project in 2019 gave an opportunity for a fresh overview of the ‘A Momentary Lapse Of Reason’ album, originally released in 1987.  By returning to some of Richard Wright’s original keyboard takes, and by re-recording new drum tracks with Nick Mason, producers David Gilmour and Bob Ezrin have restored a better creative balance between the three Pink Floyd members.

David Gilmour
“Some years after we had recorded the album, we came to the conclusion that we should update it to make it more timeless, featuring more of the traditional instruments that we liked and that we were more used to playing. This was something we thought it would benefit from. We also looked for and found some previously unused keyboard parts of Rick’s which helped us to come up with a new vibe, a new feeling for the album”.

David reflects on originally recording the album: “Bob Ezrin had worked on ‘The Wall’ with us back in ’79 and on some solo albums with me. I learnt a lot from Bob and he’s a valuable person to have on board. We started working on pieces of music that I had been writing and, come Christmas, we knew it was going well. One day, I felt this ‘thing’ coming on me that became Sorrow. I wrote five verses one evening. They just flowed out from nowhere in one of those great serendipitous moments that you recognize later as having been very valuable…. I knew that we were on a good roll and that this thing was going to work.”

Nick Mason
“Initially it seemed a bit odd to start re-assembling a record after 35 odd years, but the public’s appetite for alternate views of the same work has undoubtedly increased immeasurably over time.

Inevitably the opportunity to revisit earlier work from a period where digital technology was the brave new world became increasingly interesting.

There’s little doubt of the advantages in being able to find new elements within the music, or more often uncovering elements that became overwhelmed with all that new science…I think there is an element of taking the album back in time and taking the opportunity to create a slightly more open sound – utilising some of the things we had learned from playing so much of the album live over two massive tours.

I enjoyed re-recording drum tracks with unlimited studio time. Momentary Lapse had been recorded under considerable stress and time constraints, and indeed some of the final mixing was done at the same time as rehearsals for the forthcoming tour.

It was also nice to have an opportunity to enhance some of Rick’s work. Again, that positive tidal wave of technology just might have provided too many digital opportunities to overwhelm the band feel. Hopefully that’s one of the benefits of this remix!”

The remixed and updated ‘A Momentary Lapse Of Reason’ album also features a new album cover using an alternative beds photo by Robert Dowling from the original album cover shoot directed by the late Storm Thorgerson. Echoing the iconic original sleeve the 2021 album artwork is designed and art directed by Aubrey Powell/Hipgnosis and Peter Curzon/StormStudios.

Aubrey Powell explained, “I was looking to update the iconic five hundred beds picture my partner in Hipgnosis, Storm Thorgerson, had designed. On looking through the archives I discovered a version where the sea was encroaching on the set, just before Storm shut down the shot worried he would lose all the beds. I also wanted to make something more of the microlight. There were no shots of the plane in close up, so I hunted one down that was similar but white, and had Peter Curzon retouch the fuselage with the right colouring – red –  then strip the microlight into the picture in an upfront position. David Gilmour and Nick Mason gave their approval and, voila, a fresh approach to an original favourite”.

The album will be available as single CD, CD +DVD set, CD + Blu-Ray set, 2x 180gm LP set, the latter cut at half-speed at 45rpm for enhanced sound quality, with pre-orders from 2 September.   A special  version of the video Learning To Fly will be available simultaneously with Sony 360RA immersive audio: if you watch the video on YouTube with headphones you experience simulated 360RA sound.

Notes To Editors:
About 360 Reality Audio
360 Reality Audio is a new immersive music experience that uses Sony’s object-based 360 Spatial Sound technologies. Individual sounds such as vocals, chorus, piano, guitar, bass and even sounds of the live audience can be placed in a 360 spherical sound field, giving artists and creators a new way to express their creativity. Listeners can be immersed in a field of sound exactly as intended by artists and creators. Music content created in this new format for 360 Reality Audio can be enjoyed through compatible music streaming services.

LP1 Side B
One Slip
On The Turning Away