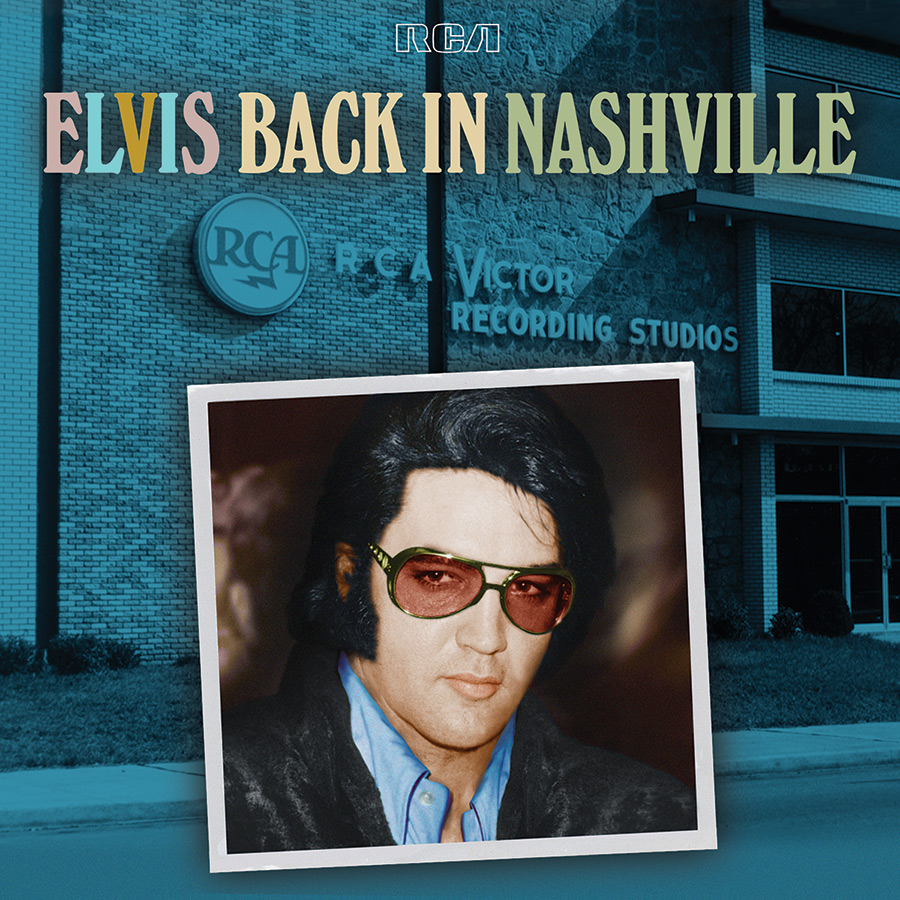 Special Elvis: Back In Nashville Unboxing Event To Be Streamed Live from Graceland Today (August 12) at 5pm ET

RCA/Legacy Recordings, the catalog division of Sony Music Entertainment, will release Elvis: Back In Nashville, the definitive presentation of Presley’s May-June 1971 Nashville studio sessions (his last in Nashville), on Friday, November 12.

“I’m Leavin’,” the first track from Elvis: Back In Nashville, is out now. Listen HERE

An Elvis: Back In Nashville special unboxing event will be streamed live from the Guest House Theater at Graceland today (August 12) at 4pm CT/5pm ET as part of Elvis Week 2021 (August 11-17). Hosts Tom Brown and mixing engineer Matt Ross-Spang will discuss the new Elvis: Back In Nashville collection and perform an unboxing of the CD and LP packages for a live attending audience. The event will be livestreamed HERE and https://www.facebook.com/Elvisthemusic.

Elvis: Back In Nashville will be available as a 4CD/digital collection featuring 82 pristine original recordings capturing Elvis and his musicians live-in-the-studio laying down central tracks and performances intended for later release. These revelatory sessions chronicle the last time Elvis would record in Nashville. Some of Elvis’ 1971 Nashville studio recordings appeared, with subsequent orchestral and vocal overdubs, on the seasonal collection Elvis Sings the Wonderful World of Christmas (1971), the Grammy-winning gospel album He Touched Me (1972), Elvis Now (1972) and 1973’s Elvis.

Graceland will be offering their exclusive 2LP 12″ color vinyl collectors pressing of Elvis: Back In Nashville. A 2LP 12″ vinyl version of the album will also be available.

Elvis: Back In Nashville, and the Graceland 2LP 12″ vinyl edition are available for pre-order HERE

Like its predecessor, From Elvis In Nashville (released November 2020), Elvis: Back In Nashville is designed to showcase Elvis Presley and his core band as they sounded during the actual sessions without orchestral overdubs and vocal accompaniment. A key difference between Elvis’ 1970 and 1971 Nashville sessions is that many of the 1971 recordings included backing singers; therefore, Elvis: Back In Nashville offers a variety of song performances both with and without vocal augmentation.

Given the prolific output of great recordings created by Elvis and his musicians during the fabled 1970 marathon sessions that may be heard on From Elvis In Nashville, RCA and the Elvis camp decided to stick with the winning combination of tight band, seasoned studio, well-chosen repertoire and relaxed spontaneous Elvis behind the microphone and, once again, record as much material as possible over a short period of time. With Elvis’ upcoming concert activities increasing, future studio time would be limited and so the goal of these sessions was to generate perhaps a year’s worth of new songs. RCA and the Colonel let Elvis know they’d like a new Christmas album, a gospel album, a pop album, and “several new singles for summer and fall releases” and so, Elvis’ music coordinator/producer Felton Jarvis booked a whole week of all-night sessions starting March 15, 1971 and brought on the same band he’d used the year before.

Elvis Presley’s return in 1970 to recording in Nashville had been revelatory. Those sessions, on the heels of his Memphis recordings and a return to the stage, had done more than simply sustain a comeback. They also introduced Elvis to a great new rhythm section and gifted Elvis with a great new sound. Bassist Norbert Putnam, drummer Jerry Carrigan, and pianist David Briggs had helped transform country music rhythms in the sixties after they transplanted their R&B-indebted style from F. A. M. E. studios in Muscle Shoals, Alabama, to Nashville session work. When producer Felton Jarvis teamed Elvis with the Muscle Shoals boys, along with session guitarist Chip Young, jack of all musical trades Charlie McCoy, and Presley’s bandleader James Burton, they together created the belatedly acclaimed Elvis Country—in the process providing Elvis with a country-soul template he’d trace often in the last years of his life.

Music critic Dave Marsh once wrote that, even with his acclaim, “Elvis Presley was probably the most underrated singer of all.” Overdubs removed, what’s revealed on Elvis: Back In Nashville is some of the most compelling singing of Presley’s career.

Disc Two of Elvis: Back In Nashville features 25 tracks divided between The Religious Sides (classic and contemporary gospel) and The Christmas Sides (sacred and secular seasonal holiday music).

Disc Three of Elvis: Back In Nashville features 19 tracks and picks up on the country pop repertoire of Disc One and adds some rock ‘n’ roll with a variety of cuts including impromptu performances of “Johnny B. Goode” and “Lady Madonna,” an epic take on Bob Dylan’s “Don’t Think Twice, (It’s Alright)”, fresh interpretations of “Help Me Make It Through The Night,” “Early Morning Rain” and more.

Disc Four of Elvis: Back In Nashville features 20 tracks and includes The Religious Outtakes and The Christmas Outtakes.