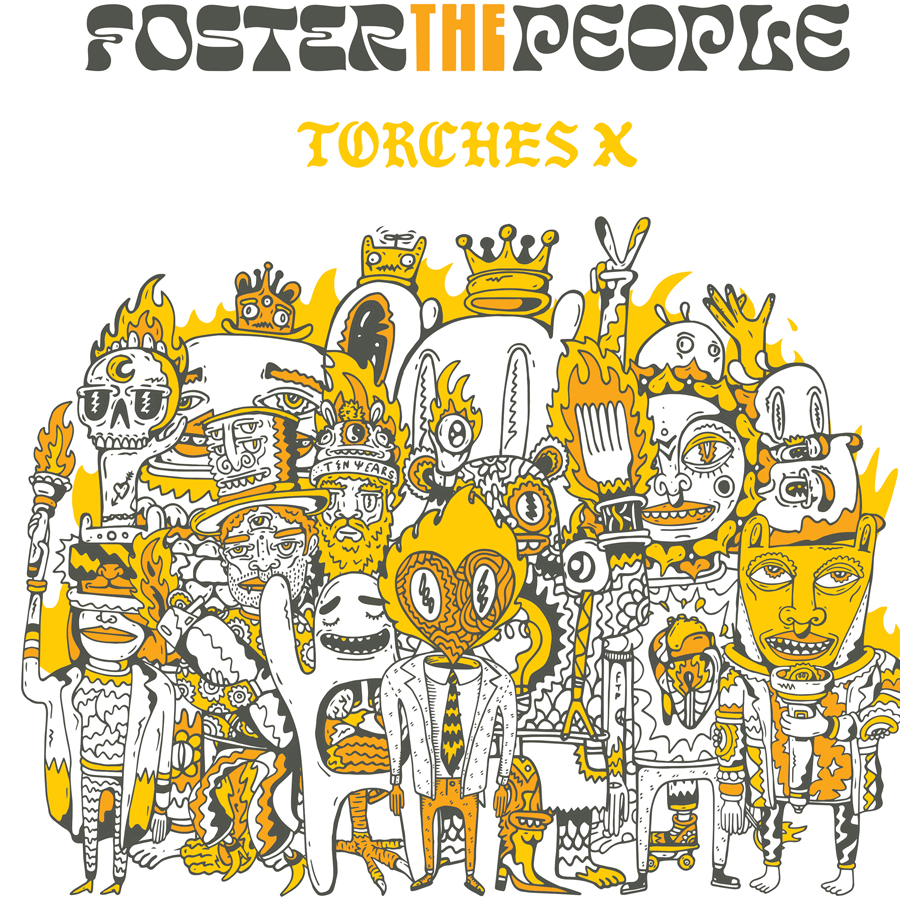 A definitive collection commemorating the album’s 10th anniversary (it was first released May 2011 on Startime/Columbia), Torches X (Deluxe Edition) includes the original album in its entirety plus ten bonus tracks including “Broken Jaw” (originally an iTunes exclusive), “Ruby” (originally a stand-alone single) and the first “official” release of “Downtown” (a Mark Foster composition recorded prior to FTP’s record deal). “Broken Jaw” will be the first track from Torches X (Deluxe Edition) to be delivered to DSPs.

For the first time in one collection, Torches X (Deluxe Edition) brings together the bonus tracks which have enhanced previous editions of the album; these songs include “Love,” “Chin Music for the Unsuspecting Hero,” “Pumped Up Kicks” (The Knocks Speeding Bullet Remix), “Houdini” (RAC Remix), “Helena Beat” (Lenno Extended Remix) and “Call It What You Want” (Treasure Fingers Pre-Party Remix Radio Edit).

As an added 10th anniversary treat for Foster the People fans, Torches X (Deluxe Edition) premieres a new version of “Pumped Up Kicks” by Gus Dapperton.

Foster the People will celebrate the 10th anniversary of the group’s debut album with a three-night run of shows at The Wiltern in Los Angeles on November 17, 18 and 19, where they will perform Torches in its entirety. For more information, please visit: www.fosterthepeople.com

Foster the People is an American indie pop band formed in Los Angeles, California, in 2009. The group was founded by songwriter/vocalist/frontman Mark Foster after he’d spent years as a struggling musician juggling commercial jingle gigs. When his song, “Pumped Up Kicks” became a viral success in 2010, Foster the People secured a record deal and began building a fanbase through small club shows and performances at music festivals. After Torches was released in 2011, “Pumped Up Kicks” became a crossover commercial radio hit, eventually reaching #3 on the Billboard Hot 100. Certified 2x platinum by the RIAA, Torches was nominated for Best Alternative Music Album at the 2012 Grammy Awards while “Pumped Up Kicks” received a nomination for the Best Pop Duo/Group Performance Grammy; “Houdini” was nominated for the Best Short Form Music Video Grammy in 2013. “Pumped Up Kicks” won Top Rock Song at the 2012 Billboard Music Awards.

Foster the People issued its first commercial non-single, a self-titled EP featuring “Pumped Up Kicks,” “Houdini” and “Helena Beat”, in January 2011. Fans who purchased the EP through the iTunes Store were able to apply it toward the purchase of the then-upcoming Torches. By the time the album was released, several of the songs on Torches had been licensed for film and television, among these: “Pumped Up Kicks” (Gossip Girl, The Vampire Diaries, Friends with Benefits, Entourage), “Houdini” (Gossip Girl); “Helena Beat” (The Vampire Diaries); “Don’t Stop (Color on the Walls)” (Suits, Nissan Motors commercial); and “Call It What You Want” (FIFA 12).

In a letter to fans, the band wrote: “It’s been a reflective time for us as we look back on all our experiences from the last ten years. Our lives changed with the release of Torches. That record became our airplane. It was our passport to see the world, to meet so many different people from so many different cultures, and to share our hearts in its purest form. We are so grateful that this album continues to reach new ears still to this day; and especially for the fans that have been with us from the beginning. Thank you for your continued support as we evolve and move into different chapters. It’s been the joy of our lives to be able to make art for you and with you. We have had a deep connection with you from the beginning. You have trusted us with your own personal stories of struggle, loss, triumph, and love. and we have trusted you with ours. The story continues, but we would like to take a moment with you to celebrate the first chapter. Thank you for giving us the greatest gift imaginable, a dream fulfilled. – Love, Foster the People”