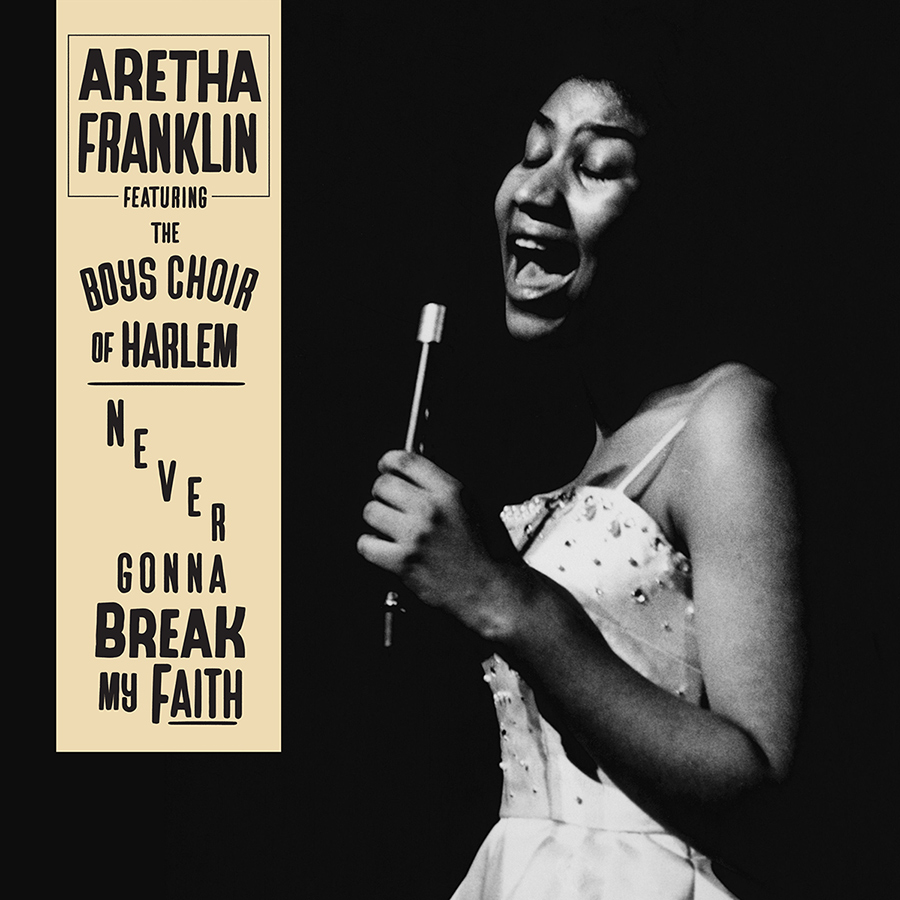 “IT WILL SHAKE EVERY FIBER IN YOUR BODY” – CLIVE DAVIS

Today, RCA Records, RCA Inspiration and Legacy Recordings collaborate to release a never-before-heard solo version of “Never Gonna Break My Faith” by the Queen of Soul, Aretha Franklin, featuring The Boys Choir of Harlem. Co-written by award-winning singer/songwriter Bryan Adams, the Grammy Award winning song was originally released as a duet with Mary J. Blige for the 2006 film Bobby. Over a decade later, the song’s lyrics are as urgent and poignant as ever. Click here to listen. See lyrics below.

Clive Davis, Sony Music’s Chief Creative Officer and longtime friend/producer of Ms. Franklin states, “The world is very different now. Change is everywhere and each of us, hopefully, is doing the best he or she can to move forward and make change as positive as possible. Music can play a major role here and Aretha’s performance is chilling. When you read the song’s lyric, and its relevance to what is happening today, it will shake every fiber in your body. Everyone should hear this record. It deserves to be an anthem.”

“When I wrote this song, I was channeling Aretha, never thinking that she’d ever actually sing the song,” says Adams. “The thought was to write a hymn, something that would try and articulate the feeling of faith, and that even though you might have lost something, there would always be an inner light to guide you. When the song was demo’d, I told the producers that Aretha would be the one to sing this – and sing it she did. This solo version has been sitting on my computer for years, and when I heard Clive was making a film on Aretha’s life, I sent this version to him. The world hasn’t heard her full performance and it really needed to be heard. I’m so glad it’s being released, the world needs this right now.”

My Lord, I have read this book so many times,
But nowhere can there I find – the page – that says
What I experienced today has any grace
Now I know that life was meant to be hard
And that’s how I’ve learned to appreciate my God
Though my courage may be tried, I can tell you I won’t hide
Because the footprints show you are by my side

My Lord, won’t you help them to understand
That when someone takes the life of an innocent man
Well they’ve never really won, and all they’ve really done
Is set the soul free – where it’s supposed to be

She is both a 20th and 21st century musical and cultural icon known the world over simply by her first name: Aretha. The undisputed “Queen Of Soul” has created an amazing legacy that spans an incredible six decades, from her first recording as a teenage gospel star, to her last studio album, ARETHA FRANKLIN SINGS THE GREAT DIVA CLASSICS (RCA Records).

Her many countless classics include “(You Make Me Feel Like) A Natural Woman,” “Chain Of Fools,” “I Never Loved A Man (The Way I Love You)”; her own compositions “Think,” “Daydreaming” and “Call Me”; her definitive versions of “Respect,” “I Say A Little Prayer” and “Rolling In The Deep”; and global hits like “Freeway Of Love,” “Jump To It,” “I Knew You Were Waiting (For Me)”- her worldwide chart-topping duet with George Michael, and “A Rose Is Still A Rose.”

The recipient of the U.S.A.’s highest civilian honor, The Presidential Medal Of Freedom, eighteen GRAMMY Awards, a GRAMMY Lifetime Achievement and GRAMMY Living Legend awardee, Aretha Franklin’s powerful, distinctive gospel-honed vocal style has influenced countless singers across multi-generations, justifiably earning her Rolling Stone magazine’s No. 1 placing on the list of “The Greatest Singers Of All Time.” One of the best-selling female artists of all time, having sold over 75 million records worldwide, Ms. Franklin’s incomparable voice and remarkable career have left an indelible mark on the lives of many and will never be forgotten.