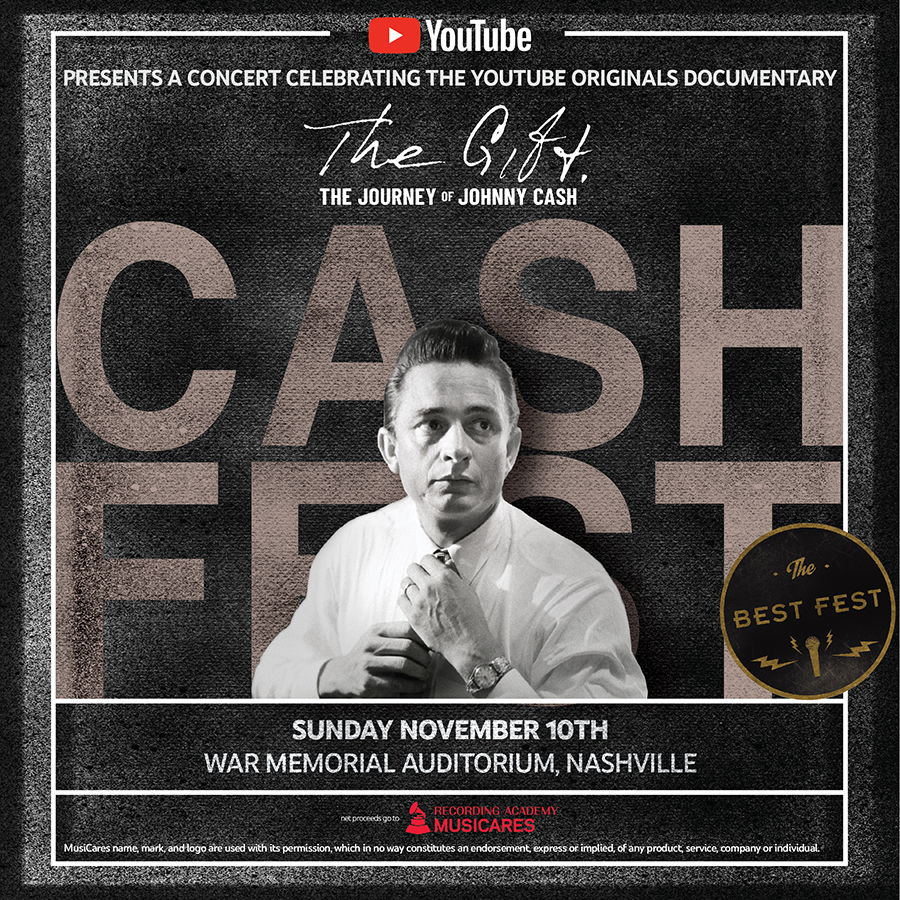 In celebration of the November 11 premiere of the YouTube Originals documentary, “The Gift: The Journey of Johnny Cash,” The Johnny Cash Trust and The Best Fest, in partnership with YouTube, are bringing fans the first-ever Cash Fest, an unprecedented charity concert in Nashville honoring the music of the legendary Johnny Cash. The revue-style show, taking place November 10 at the War Memorial Auditorium, will feature an all-star lineup performing their favorite Johnny Cash songs—including Drew & Ellie Holcomb, Devin Dawson, John Oates, Lucie Silvas, Wilder Woods, and more. Tickets for the event are available now: http://bit.ly/cashfest. Proceeds from ticket sales will benefit MusiCares®, helping musicians with critical assistance in times of need.
In addition to the stellar Cash Fest lineup of all-stars, the event will also feature an incredible house band of seasoned musicians that have shared the stage with some of music’s most celebrated artists. Johnny Cash fans in the audience will also get a sneak peek of the documentary, with clips playing throughout the evening ahead of its YouTube debut.

The Gift: The Journey of Johnny Cash (TRAILER), created with the full cooperation of the Cash estate and rich in recently discovered archival materials, brings Cash the man out from behind the legend. Taking the remarkable Folsom Prison recording as a central motif and featuring interviews with family and celebrated collaborators, the 90-minute documentary from Emmy Award-winning director Thom Zimny (Elvis Presley: The Searcher, Springsteen on Broadway) explores the artistic victories, the personal tragedies, the struggles with addiction, and the spiritual pursuits that colored Johnny Cash’s life. The documentary will be available for free on YouTube Originals on November 11.

“The Gift: The Journey of Johnny Cash” is directed by Thom Zimny and produced by Thom Zimny, Glen Zipper, Sean Stuart and Jillian Apfelbaum. Frank Marshall, Ryan Suffern, Jeff Pollack, John Carter Cash, Josh Matas, Dan Friedkin, Bradley Thomas, Ryan Friedkin and Jasmine Daghighian serve as executive producers. The documentary is an Imperative Entertainment and Kennedy/Marshall production in association with Sutter Road Picture Company and The John R Cash Trust. The original composition for this project was composed and performed by Mike McCready. The documentary originally made its debut in March at the SXSW Film Festival and also screened recently at the 50th Annual Nashville Film Festival and the Telluride Film Festival as part of the event’s Backlot Series. “The Gift: The Journey Of Johnny Cash: Original Score Music From A Film By Thom Zimny,” will be released in November by Legacy Recordings, a division of Sony Music Entertainment.

Launched in May 2005, YouTube’s mission is to give everyone a voice and show them the world. We believe that everyone deserves to have a voice, and that the world is a better place when we listen, share and build community through our stories. YouTube is a Google company.

About The Best Fest:

What began as a jam-session in a tiny Lower East Side bar to celebrate Bob Dylan’s 60th birthday in 2001, The Best Fest – producers of Dylan Fest, Petty Fest, Stones Fest, George Fest, Brian Fest and Neil Fest all-star charity concert series – are now a rock and roll tradition. The New York Times described The Fests as “one of the most jubilant events of the year” and RollingStone has touted it as “an experience that is equal parts concert and celebration.” The Best Fest travels the globe producing one of a kind all-star charity concerts. They have raised hundreds of thousands of dollars for charity nationally. Sold out shows in New York, Los Angeles, San Francisco, Seattle, Austin, Nashville, New Orleans, Chicago, and Dublin have featured guest performances from an incredible and diverse array of celebrities and artists including: Brian Wilson, Norah Jones, Johnny Depp, The Black Keys, Kings of Leon, The Strokes, The Heartbreakers, The Killers, The Flaming Lips, Emmylou Harris, Kesha, Perry Farrell, Spoon, Jason Sudeikis, Kristen Wiig, Ben Harper, “Weird Al” Yankovic, Ann Wilson, Jakob Dylan, Trisha Yearwood, Jason Isbell, and many more. Their production of George Fest: A Night To Celebrate The Music of George Harrison, is now a beautifully captured live album and full length concert film available on Vagrant Records (BMG).  Fest Productions LLC is a proud supporter of MusiCares® helping musicians with critical assistance in times of need.

Established in 1989 by The Recording Academy, MusiCares provides a safety net of critical assistance for music people in times of need. MusiCares’ services and resources cover a wide range of financial, medical and personal emergencies, and each case is treated with integrity and confidentiality. MusiCares also focuses the resources and attention of the music industry on human service issues that directly impact the health and welfare of the music community. For more information, please visit www.musicares.org. For breaking news and exclusive content, please “like” MusiCares on Facebook, and follow @MusiCares on Twitter and Instagram.