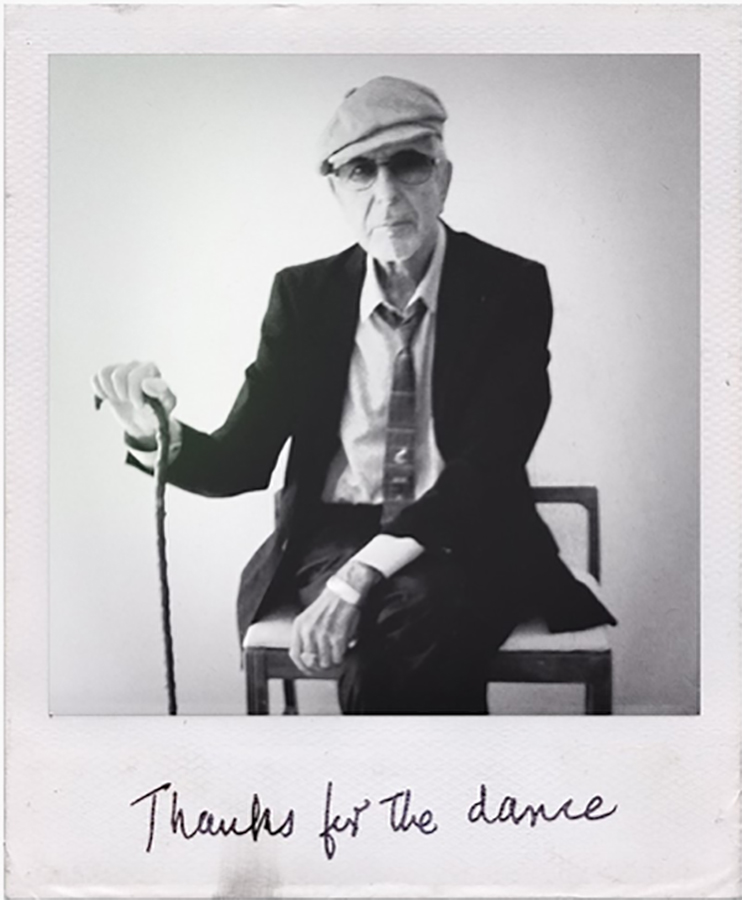 “The Goal” First Track From ‘Thanks For The Dance’

In a posthumous new album, Leonard Cohen has robbed death of the last word.

‘Thanks for the Dance’ is not a commemorative collection of B sides and outtakes, but an unexpected harvest of new songs, exciting and vital, a continuation of the master’s final work. It will be released on November 22, and is available by pre-order today.

Seven months after his father passed, Adam Cohen retreated to a converted garage in his backyard down the street from Leonard’s house, to work with his father again, to stay in the company of his voice. From their previous collaboration on ‘You Want It Darker’ there remained bare musical sketches, at times little more than vocals. Leonard had asked his son to bring these works to completion.

This remarkable new album was made in many places. Javier Mas, the great Spanish laud player who accompanied Leonard on stage for the last eight years of touring, flew from Barcelona to Los Angeles to capture the artist’s spirit on Leonard’s own guitar. In Berlin, at a musical event called People Festival, Adam invited friends and comrades to lend their ears and talents. Damien Rice and Leslie Feist sang. Richard Reed Parry of Arcade Fire played bass. Bryce Dessner of The National played guitar, the composer Dustin O’Halloran played piano. The Berlin-based choir Cantus Domus sang, and the s t a r g a z e orchestra played. In Montrealthe famed producer Daniel Lanois dropped in, beautifully enriching sparse arrangements. The Shaar Hashomayim choir, who played such important part of the sound of the last album, contributed to a song, and Patrick Watson brought his inimitable talent as co-producer to a song. Back in Los Angeles Jennifer Warnes, one of the keepers of Leonard’s flame, sang background vocals, and Beck contributed on guitar and Jew’s harp. Michael Chaves, who elegantly recorded and mixed ‘You Want It Darker’, did the engineering and mixing.

And so was born ‘Thanks For The Dance’, a brand new Leonard Cohen album that uncannily recalls the essence of his sound.

“In composing and arranging the music for his words, we chose his most characteristic musical signatures, in this way keeping him with us,” said Adam Cohen. “What moves me most about the album is the startled response of those who have heard it. ‘Leonard lives’! they say, one after the other.”

‘Thanks for the Dance’ is an unexpected blessing, a gift of beauty and strength. Leonard Cohen’s voice has not been stilled. The dance goes on.

Today, “The Goal” premieres, the first of a series of videos from the album.

Thanks For The Dance

1. Happens to the Heart

3. The Night of Santiago

4. Thanks for the Dance

9. Listen to the Hummingbird