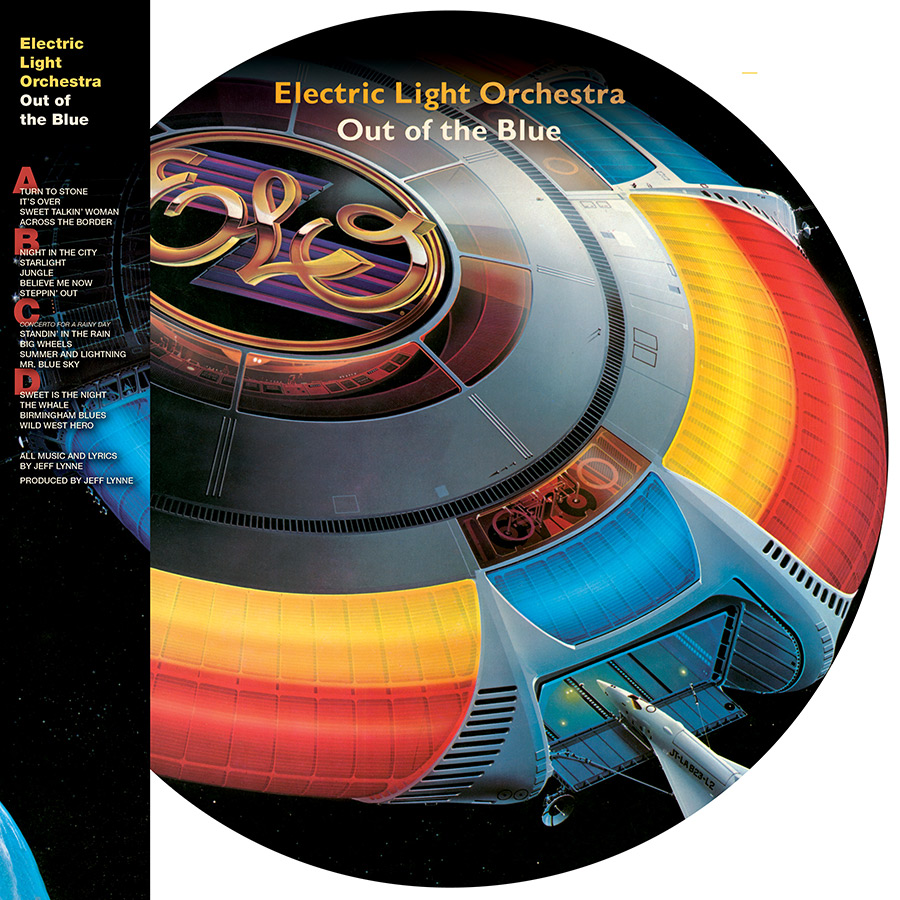 Celebrating the 40th Anniversary of ELO’s Out of the Blue, Legacy Recordings to Release First-Ever Picture Disc Edition of Classic Double Album

Celebrating the 40th anniversary of ELO’s top-selling double album, Out of the Blue, Legacy Recordings, the catalog division of Sony Music Entertainment, will release the first-time-ever picture disc edition of the ELO classic available everywhere on Friday, November 24.

This 2LP collector’s picture disc edition of Out of the Blue was remastered from the original master tapes and includes a digital download of the album.

Out of the Blue is available for pre-order now here: https://LegacyRecordings.lnk.to/Outoftheblue/lang/us

One of the indisputable masterpieces–and most commercially successful titles–in the ELO canon, Out of the Blue, the group’s seventh studio album, was originally released in October 1977. The musical and conceptual brainchild of Jeff Lynne, who wrote and produced the entire album, Out of the Blue is among the most ambitious double albums in classic rock history, a complex and visionary work that included, as the album’s complete Side 3, Lynne’s “Concerto for a Rainy Day,” a coherent song suite comprised of four movements and authentic ambient weather effects recorded by Lynne and incorporated into the soundscape of the record.

Out of the Blue was the first ELO album to feature the group’s logo as a three-dimensional flying saucer/space station, a visual motif central to ELO’s live shows. The album, which peaked at #4 on the Billboard 200 has gone on to sell upwards of 10 million copies worldwide. Out of the Blue is the first double album in UK chart history to spawn four Top 20 singles.

“Forty years on, I would never have imagined that this music would take on a life of its own,” says Lynne.

Formed in Birmingham, England in 1970, ELO was designed to create progressive modern pop music combining classical and rock elements. Lynne has consistently been ELO’s guiding light and driving force, writing virtually all of the group’s original material while producing the albums.

From 1972 through 1986, the golden era of recording and touring, ELO racked up more combined UK and US Top 40 hits than any other band on the planet while selling more than 50 million records worldwide. During the same period, ELO scored twenty Top 20s on the UK Singles Chart and fifteen Top 20s on the US Billboard Hot 100.

More recently, recording and touring as Jeff Lynne’s ELO, saw the 2015 release of the critically acclaimed album Alone In The Universe on Columbia Records, the first album of all-new music released by the band in over a decade. The band also just played a sold-out Wembley Stadium show in London on June 24th.

ELO
“Out Of The Blue”
2 LP Picture Disc