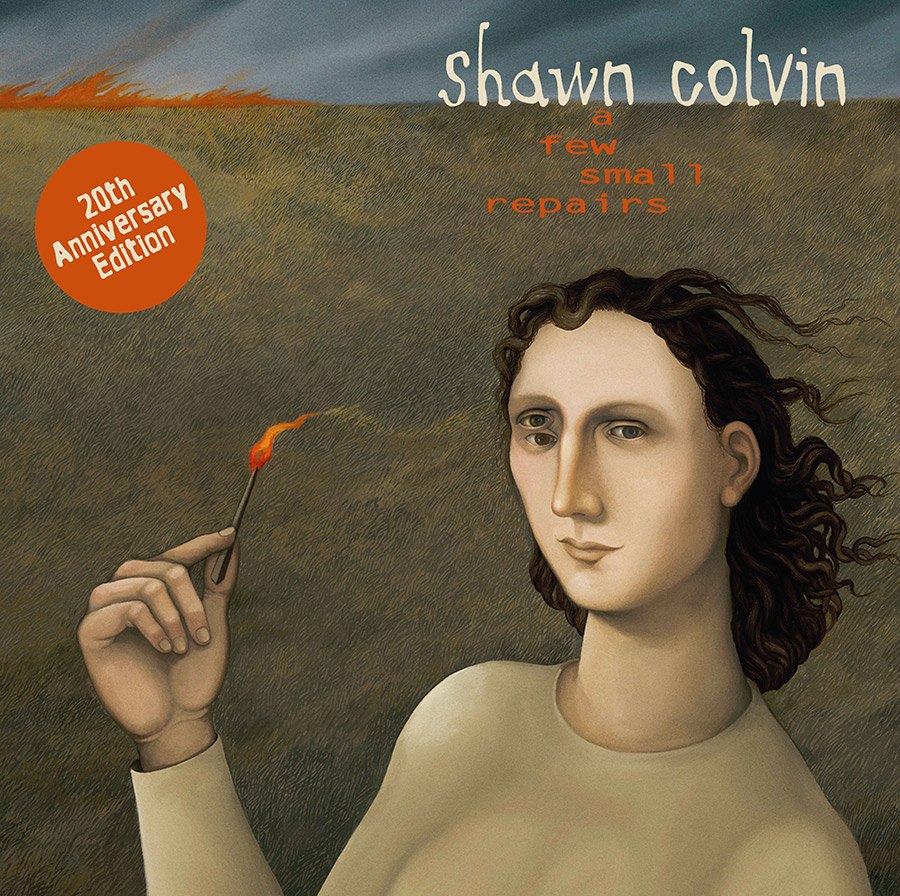 New York, NY — Columbia/Legacy Recordings, a division of Sony Music Entertainment, will celebrate the 20th anniversary of Shawn Colvin’s masterpiece, A Few Small Repairs, with the release of a newly expanded edition of the album on Friday, September 15.

A Few Small Repairs includes the Grammy Award-winning “Sunny Came Home” plus chart-toppers “You and The Mona Lisa” and “Nothin’ On Me” (the theme song for the NBC sitcom Suddenly Susan). This expanded anniversary edition includes seven rare live performances culled from the Sony Music archives, plus enhanced artwork including newly-written liner notes by Shawn Colvin and producer John Leventhal and recently discovered archival photos.

PledgeMusic will be offering all three configurations of A Few Small Repairs as well as a digital EP A Few Extra Repairs, additionally, an exclusive DVD featuring the original promo videos for the album (including a “lost” alternate version of “Sunny Came Home”) plus Colvin’s 1997 performance on the series Sessions At West 54th, as well as previously unreleased rehearsal and performance footage from the broadcast.

Pledgers can pre-order the album now on Shawn Colvin’s campaign page. The leaders in direct-to-fan platforms, PledgeMusic allows artists to get more personal with their fans, offering updates straight from the artist and items not available anywhere else. Fans who pre-order via PledgeMusic will get the AccessPass, which will give them early access to digital downloads, plus the opportunity to pledge on exclusive merchandise. This includes: signed CD’s, LP’s and vinyl test-pressings, personally hand-written and signed song lyrics, an exclusive DVD with never-seen performance and behind-the-scenes footage, “Voodoo Dolls” hand-made by Shawn, “A Few Extra Repairs” bonus tracks digital EP, shopping trips and coffee dates with Shawn, and much more! Pre-order here: http://pmusic.co/lvmZ86

This fall, Shawn Colvin will hit the road with the A Few Small Repairs 20th Anniversary Tour. Her first major tour with a full band since the album’s original release, the seven-week cross-country jaunt runs from September 30 through November 19 and will showcase Shawn performing the album in its entirety alongside a variety of hits, personal favorites and surprises from her repertoire. Multi-instrumentalist-singer Larry Campbell & his wife singer-guitarist Teresa Williams will support all dates in addition to appearing in the band.

Advance ticket sales on the tour will be bundled with the album pre-sale wherever possible. VIP ticket packages will also be available. Please visit: http://www.shawncolvin.com

“One of the joys of my career was making A Few Small Repairs,” said Shawn Colvin. “From inception to completion, the project was graced with joy and creative ease. Even the last minute push to finish ‘Sunny Came Home,’ which went through many lyrical incarnations, worked out thanks to the cover painting by Julie Speed. I’ll be thrilled to play that song forever, and am equally thrilled to be performing the whole album on tour this fall with my band. Come one, come all!”

By the time that A Few Small Repairs and “Sunny Came Home” catapulted her into the pop mainstream Shawn Colvin was already a well-established recording artist and touring performer with a resume of accolades. Her 1989 John-Leventhal-produced debut, Steady On, had taken home the Grammy for Best Contemporary Folk Album and subsequent releases Fat City (1992) and Cover Girl (1994) each multiple-categories nominees.

A Few Small Repairs reunited her with producer/cowriter John Leventhal (who’d helmed Steady On) and proved a watershed in the artist’s career and musical evolution. While her previous albums were founded mainly upon first-person confessionals, A Few Small Repairs saw Colvin foray into third-person storytelling with a powerful impact. Drawing from the downs and ups of her own life experiences, Shawn Colvin crafted an album of emotional complexity, nuance and revelation, combining images of traditional femininity and domesticity–wedding gowns, kitchens, white picket fences–with images of tools as metaphors for reparation.

The album paints a searingly honest portrait of the scope of human relationships, from the acrimonious “Get Out of This House” to the wistful “The Facts About Jimmy,” a duet with Lyle Lovett, to the quiet resignation of “Wichita Skyline” to Sunny’s ultimate act of revenge in “Sunny Came Home.” With brutal honesty, Colvin examines the harrowing potential for emotional damage to the redemptive power of subsequent emotional redemption.

The Los Angeles Times called A Few Small Repairs “an effective sharing of an experience both personal and universal.” Entertainment Weekly gave the album an “A” rating, praising it as “a declaration of independence… Full of wisdom and ravishing melodies, Repairs is a tour de force that needs no fixing.”

Colvin and Leventhal triumphed at the 1998 Grammy Awards, when “Sunny Came Home” won both Song of the Year (a songwriting award shared by Shawn and Leventhal) and Record of the Year. A Few Small Repairs was certified RIAA Platinum on March 31, 1998.

Sessions At West 54th, 1997 Broadcast (continuous including interview segments)
Kill The Messenger
The Facts About Jimmy
You and the Mona Lisa
Sunny Came Home
Diamond In The Rough

About PledgeMusic:
PledgeMusic is a global next-generation music company and direct-to-fan e-commerce platform dedicated to enabling artists to build communities, fund and pre-sell recordings, and provide unique experiences and exclusives throughout the entire music production and promotion lifecycle. The company has offices in New York, Los Angeles, London, and Nashville.