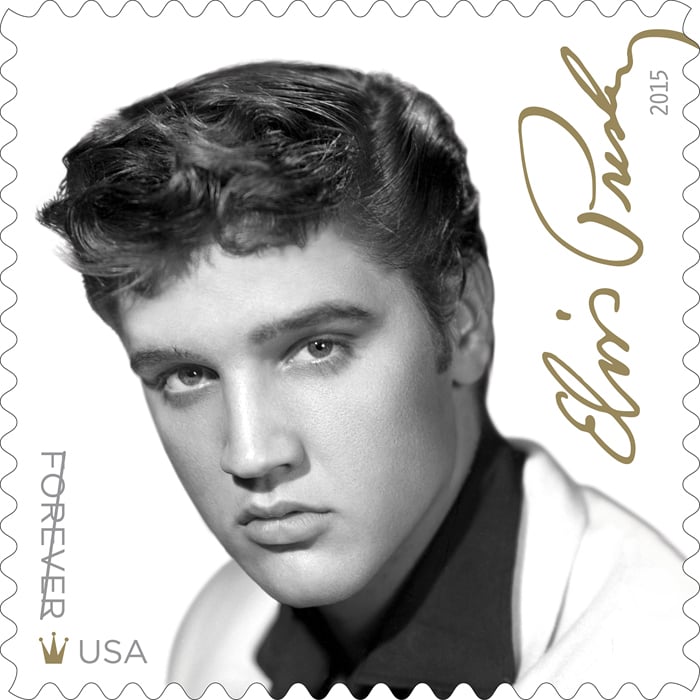 WASHINGTON — The U.S. Postal Service previewed the Music Icons: Elvis Presley Commemorative Forever stamp today and joined with Sony Music’s RCA/Legacy Recordings in announcing the upcoming debut of an exclusive music CD titled ELVIS FOREVER that includes an Elvis song, as you’ve never heard it before. The CD will be available online and in select Post Offices beginning August 12 — on the same day as the Elvis Presley stamp dedication ceremony.

Priscilla Presley will join Postmaster General Megan Brennan in dedicating the stamp on the morning of Aug. 12 at Graceland in Memphis as part of this year’s Elvis Week celebration. The public is encouraged to tweet about this news using #ElvisForever.

The Postal Service is proud to announce the offering of an exclusive CD of 18 Presley hits titled, ELVIS FOREVER, which includes a new performance of Elvis’ inspiring song “If I Can Dream” as you’ve never heard it before. “If I Can Dream” has been selected from a forthcoming Fall 2015 Elvis Presley album release. Customers can get this track first by picking up a copy of ELVIS FOREVER at their local Post Office location or pre-order the stamps and the commemorative $9.99 CD now at this link for delivery shortly after August 12.

The King of Rock and Roll™
Elvis Presley is regarded as one of the most significant cultural icons of the 20th century. Known worldwide as “The King of Rock ‘n’ Roll,” his music and unique performance style, combined with a singularly potent mix of influences, made him enormously popular. “The King’s” influence continues to inspire many of today’s artists, musicians, designers and social influencers.

During his lifetime, Presley starred in 33 films, recorded 18 number one singles, and racked up 14 Grammy nominations and three Grammy wins. He sold out every one of the 1,140 concerts he performed after serving in the Army. To date, no one has ever surpassed his record for scoring the most Top 40 hits, a total of 114. Presley is the first recording artist to have sold more than one billion albums, cementing his status as the King of Rock ‘n’ Roll.

The Postal Service previously honored Presley on a stamp in 1993. The Smithsonian’s National Postal Museum calls that stamp the most popular U.S. commemorative stamp of all time.

The Stamp Image
This stamp features a 1955 black-and-white photograph of Presley taken by William Speer. In the bottom left corner, between the words “Forever” and “USA,” is a small gold crown, a nod to Presley’s nickname, The King of Rock ‘n’ Roll. Presley’s signature, in gold ink, also is featured along the right side of the stamp.

The square stamp pane resembles a vintage 45 rpm record sleeve. One side of the pane includes 16 stamps while the image of a sliver of a record seems to peek out of the top of the sleeve.

The following text borders the block of 16 stamps:

“During his illustrious career, rock-and-roll superstar Elvis Presley starred in dozens of feature films, won three Grammy Awards, and recorded 18 number one singles: Heartbreak Hotel, I Want You, I Need You, I Love You, Don’t Be Cruel, Hound Dog, Love Me Tender, Too Much, All Shook Up , (Let Me Be Your) Teddy Bear, Jailhouse Rock, Don’t, Hard Headed Woman, A Big Hunk O’ Love, Stuck On You, It’s Now Or Never, Are You Lonesome Tonight?, Surrender, Good Luck Charm, Suspicious Minds.”

The Postal Service receives no tax dollars for operating expenses and relies on the sale of postage, products and services to fund its operations.