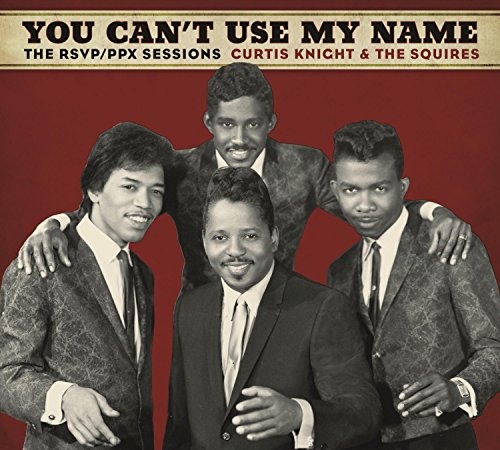 EXPERIENCE HENDRIX L.L.C. AND LEGACY RECORDINGS TO RELEASE YOU CAN’T USE MY NAME: CURTIS KNIGHT & THE SQUIRES (FEATURING JIMI HENDRIX) THE RSVP/PPX SESSIONS ON MARCH 24

February 18, 2015 – New York, NY – Experience Hendrix L.L.C. and Legacy Recordings are releasing You Can’t Use My Name: Curtis Knight & The Squires (Featuring Jimi Hendrix) The RSVP/PPX Sessions – the first in a series that presents these recordings in their original context. The specially priced fourteen-track collection, taken from sessions in 1965 and 1966 [plus one July 1967 recording], will be available on CD and 150 gram LP on March 24.

In the mid 1960s, before launching a solo career that has profoundly influenced and altered the course of popular music, Jimi Hendrix was a little known sideman, working for short periods with a variety of artists including the Isley Brothers, Don Covay, Little Richard, and the Harlem-based R&B combo Curtis Knight & The Squires.

Ed Chalpin was an entrepreneur and record producer who founded PPX International, Inc. in 1960. He had created a lucrative business by recording cover versions of top US hits for foreign record companies, who then overdubbed translated lyrics. In addition to creating remakes for foreign markets, Chalpin had begun to produce original material at his New York recording facility Studio 76 that he would license to various record labels. Chalpin auditioned Curtis Knight in 1965 and agreed to manage and produce him.

In October 1965, Knight introduced Jimmy Hendrix to Chalpin. After their initial recording session yielded Knight’s “How Would You Feel,” Chalpin signed Jimi Hendrix to a notorious three-year recording contract for $1.00 and a 1% royalty. Hendrix had thought he was signing a release as a backing musician, later noting, “I took it as an insure of getting paid for the session…” In 1966, Chalpin licensed two singles from Hendrix’s sessions with Curtis Knight to RSVP Records, a New York based independent label owned by Jerry Simon. “How Would You Feel” b/w “Welcome Home” and “Hornet’s Nest” b/w “Knock Yourself Out.” The latter two instrumentals were composed by Hendrix and stand as the first ever commercial release of his own music. Both of these efforts missed the charts entirely and, as a result, Simon’s interest in the group waned and RSVP did not issue a third single.

Hendrix would continue to intermittently perform as a member of Curtis Knight & The Squires in 1966. He had also formed his own group Jimmy James & The Blue Flames in Greenwich Village. It was there where Animals bassist Chas Chandler spotted Hendrix performing “Hey Joe” at the Café Wha?. He offered to take Hendrix to London to record a version of the song and serve as his producer.

In September 1966, Chandler escorted Hendrix from New York to London to make good on his promise. Under his guidance, Hendrix formed the Jimi Hendrix Experience with drummer Mitch Mitchell and bassist Noel Redding. Chandler rushed them into the recording studio, pawning his bass guitar to help fund the group. Chandler’s faith was rewarded in December 1966 when “Hey Joe” became a hit in England and soon throughout Europe. “Purple Haze” and “The Wind Cries Mary” followed in quick succession and were even more successful. In a matter of months, Hendrix had transformed from a struggling, little known sideman to the brightest new star in popular music.

Ed Chalpin had learned of Hendrix’s international success via reports in industry trade journals. Beginning in May 1967, Chalpin had begun notifying every company he could identify as doing business with Hendrix that his company PPX had previously signed the guitarist to an exclusive three year contract covering the term between October 1965 and October 1968.

Beginning with December 1967’s Get That Feeling, Chalpin began to compile and license albums featuring the master recordings Hendrix had recorded as a sideman to Knight. Get That Feeling was followed by October 1968’s Flashing. Hendrix’s burgeoning fan base was confused by the lack of liner notes or accurate cover imagery [Get That Feeling featured a photograph of Hendrix performing at the Monterey Pop Festival] as these albums gave full artist billing to Jimi Hendrix.

Jimi Hendrix was hamstrung throughout his career by litigation over these recordings in the US and UK and these fights continued until his family ultimately prevailed in litigation against Ed Chalpin and PPX in 2003. Experience Hendrix has since acquired all of the recordings controlled by Chalpin and PPX and this compilation stands as their first attempt to present this music in its original context.

You Can’t Use My Name kicks off with “How Would You Feel,” a 1966 single based in part on Bob Dylan’s “Like a Rolling Stone.” “How Would You Feel” tackles sensitive race issues, pre-dating by a few years the explosion of popular R&B acts latching onto the thriving Black Power movement. Its b-side “Welcome Home” is also featured on the collection. These tracks represent a musical touchstone, as Hendrix (listed as “Jimmy Hendrix”) received his first ever label credit as an arranger of both songs. Also included is the instrumental “Hornet’s Nest” and its b-side “Knock Yourself Out [Flying On Instruments],” both of which were composed by Hendrix.

Capping off You Can’t Use My Name is the August 1967 track that spawned its namesake. Heard for the first time is the fascinating section of studio chatter that precedes a take of “Gloomy Monday,” wherein Hendrix repeatedly requests that Chalpin not use his name in the marketing of the recording, and Chalpin agrees, albeit, ambiguously. Already months deep into litigation, it can only be theorized that Hendrix continued to participate in sessions with Chalpin as a gesture of goodwill in the hope that all would be forgiven. It didn’t pan out that way, and the dialog is an interesting footnote to the complicated history between the two parties.

“We are extremely delighted to now be in a position to offer these rare, historic recordings,” commented Experience Hendrix President and CEO Janie Hendrix, sister of Jimi Hendrix. “What makes them so special is that they provide an honest look at a great artist during the pivotal time when he was on the cusp of his breakthrough.. a time when Jimi’s number one priority was playing and recording, and this set captures him doing just that, both as a collaborator and an innovator. They are more than just recordings, they represent a significant segment in the timeline of Jimi’s musical existence.”

Original Jimi Hendrix Experience recording engineer Eddie Kramer recently went to pain-staking lengths to maximize the audio quality on the collection. “We’ve taken every single performance as far back as we could go in terms of source and we came up with the best original performances, stripped them back and re-mixed them and made what we feel is the best representation of those recordings,” says Kramer. “It’s a continuing archeological sound dig which is to say you sweep away the dirt with a fine brush and find the gem hidden therein. It’s what I call ‘forensic audio’ where we use every available piece of outboard gear and plug-ins and whatever tools are available to us. It’s been hours and hours of intensive work but it’s truly been fun to find the best performances and to make sense out of them.”

These recordings made for PPX and RSVP are part of Jimi Hendrix’s extraordinary legacy. They neatly align with those other sessions Hendrix participated in during this same era as a sideman for other acts. Absent the confusion as to Hendrix’s true involvement, these recordings provide a snapshot of his development immediately prior to his discovery by Chas Chandler. “I was a backing musician playing guitar,” Hendrix explained in a 1967 interview. “I was always kept in the background, but I was thinking all the time about what I wanted to do.” Enjoyed in this context, these Curtis Knight sessions showcase his evolving technique and emerging brilliance.

You Can’t Use My Name: Curtis Knight & The Squires (featuring Jimi Hendrix) The RSVP/PPX Sessions tracklist:
1) How Would You Feel
2) Gotta Have A New Dress
3) Don’t Accuse Me
4) Fool For You Baby
5) No Such Animal
6) Welcome Home
7) Knock Yourself Out [Flying On Instruments]
8) Simon Says
9) Station Break
10) Strange Things
11) Hornet’s Nest
12) You Don’t Want Me
13) You Can’t Use My Name
14) Gloomy Monday

About Experience Hendrix L.L.C.:
Founded by James ‘Al’ Hendrix, Jimi’s father, in 1995, Experience Hendrix, has been managed since its inception by the family members handpicked by Al during his tenure as Chairman. It is the official family company charged with managing the music, name, image and likeness of Jimi Hendrix. As a part of their daily operations, Experience Hendrix and Authentic Hendrix oversee Jimi’s timeless legacy on a worldwide basis.